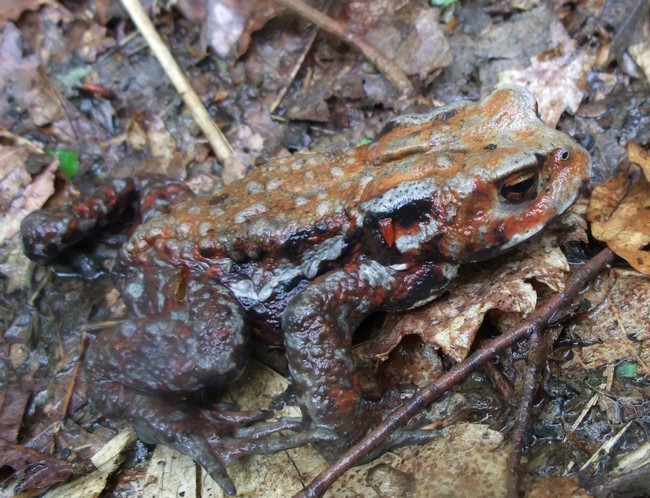 The rain had started before I even managed to rent the car at Takasaki. The 50 km/h speed restriction on the expressway due to thick fog and rain did nothing to lift my low spirits, but I had resolved to hike this weekend regardless of the grim forecast. On either side of the country road heading up the valley, detached farmhouses stood in the center of their land, soft light filtered through the paper screen windows reflecting from the filled paddies. But in the total darkness, Sakurazaka carpark at the base of Makihata was unnerving. As the car headlights swung around, I was greeted by large signboards screaming in bold red letters “DO NOT use the Nukubi course or Tengu course. Extreme danger!”, “Hike at your own risk – we take no responsibility!”, “DO NOT dig out the refuge hut with ice-axes”, “Sawa route closed due to landslide”, “Bears – beware!” It was enough to make me head for the climbers’ card box (for the first time) to fill in a route card, but there were none… 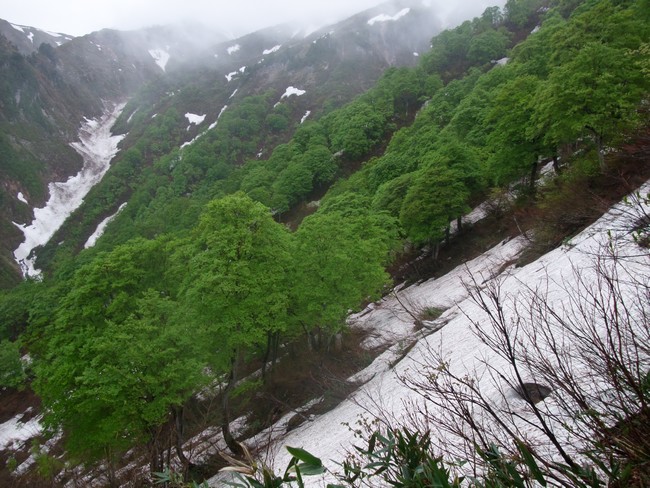 I decided to hike as fast as possible, with a jacket but without Goretex bottoms. Surely the gaiters would keep the water out? This was stupid. Within half an hour, there was a pond in each boot. The path was a stream, and the rain became increasingly horizontal higher up. Would the dog get blown off the ridge in these winds? She really was not happy and kept stopping to shake off the water, 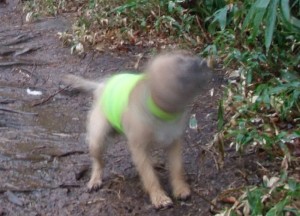 or rub her face in the snow, perhaps to find relief from the painful driving rain. And we both kept getting caught by the spring-loaded branches of silver birches that had been bowed down into the snowpack by the burden of winter but were now primed for release by a misplaced foot.

What constitutes the top of a hyakumeizan? The solid signpost and height marking of 1967m were unmistakable, but the GPS and map showed that the highest point was another 5 minutes up the snowfield. I didn’t care – I was grateful for whoever had decided that this was the top, and beat a hasty retreat, stopping briefly at the refuge hut which surely is the best I have seen, a solidly constructed timber hut complete with ensuite toilet.

Upon descending, there was now a second car, but the three occupants from Tokyo had decided it was not worth going up today, and upon seeing me emptying out water from boots, pack and pockets, kindly made me a bowl of steaming salty miso. Thank you.

Naeba was little better, the rain still beating down as I parked in the desolate ski ground, the sordid remnants of the season now littering the mountain. Broken poles, ripped netting and discarded junk disfigured the slopes. Once again, there was no one else on the mountain, no footprints in the mud or snow. I was glad to get up, down and away.