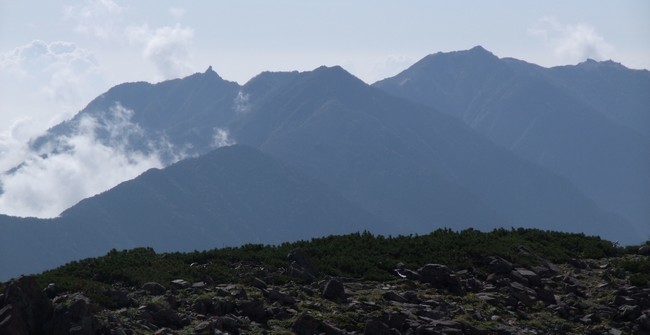 The tied-back cloth over the head, rubber boots and knowing nod to the bus driver marked him out from the collection of regular hikers waiting for the first 6 am bus. In his sixties with not an ounce of spare fat on his frame, he wasted no time sitting down next to me and letting me know that he had been up Senjogatake more than a dozen times, and was involved in repairing the hiking paths and patrolling the national park.

Hana was in the carrycase hidden under the bench, silent as usual. I knew that I should not advertise her presence, but when she suddenly snorted at a scent carried on the breeze, the ranger did a double-take, eyebrows raised. I ignored his suspicious glance and asked him about the irony of the Minami-Alps rindo, forced through the Alps to satisfy construction companies and politicians, but arousing sufficient hostility to put the project on hold for a while.

And so it was with relief that the first bus of the season came and one hour later, disgorged a dozen passengers at Kitazawa-toge. The bus should have been running a month ago, but the winter damage had been severe this year, and major repairs were underway to keep the road concreted precariously to the cliff faces.

No private cars are allowed, not even bicycles. Last year, I had cycled the route through to Kofu in the dead of night, long after the gate guardsman at the bottom had gone home. A decade ago, I had started at dawn while the gate was unmanned, but halfway up, was shouted at by road workmen. Then 30 minutes later, a police car with flashing lights came racing up from behind and pulled me over. [Oh please can’t you find something better to do on a Sunday morning.] “Not allowed to cycle here,” he admonished, “Get in the car!” I did, with the bike, and he drove me to the top, Kitazawa-toge. “Get out,” he barked. Then, with a knowing smile, “This side is Nagano prefecture, my responsibility. That side is Yamanashi,” and sped back down the way he had come.

With this life of crime behind me, today I was eager to get away from the milling crowd at the pass. I prepared myself quickly and unobtrusively, let Hana out of the bag at the last minute, then ran up the path. I heard a cry of “Aarghh, it’s a dog” echoing as I disappeared around the first bend and was off up the hill.

There was no-one else up here yet, the skies were clear, and the morning was ours to enjoy.

Back down at Kitazawa pass, at the command of “House”, Hana obediently went back into hiding in her carrycase while I restocked on snacks and water, then once again, made a dash for the start of the Kaikomagadake trail. No sooner was she out of the bag than an SUV patrol car with flashing light came up the road. “Oh $#@*!” You would think it was sin city itself. I ducked into the forest and was quickly hidden from view.

Having done the long Kuroto-one route on the eastern side last year, I had assumed this shorter western route would be easy, but the route involved a few rock scrambles and helping hand for Hana. In retrospect, the maki-michi would have been the easier, but less fun option. The small shrine at the top was decorated with straw sandals. Do the real pilgrims walk back down barefoot?

I had checked the departing bus times and from the top of Kaikoma, the bus at 1 pm now looked a possibility and would avoid a long wait for the next one. Without a break, we scrambled back down to Kitazawa pass with 10 minutes to spare, put the dog in her case, and who should turn up but the ranger who had preached to me this morning. “Enjoy your jaunt up Senjo?” he asked, with just a whiff of condescension. “Yes, and Kaikoma”. “What the top?” he asked, his face registering total disbelief. “Yes, the top. Of both.” It was his turn to snort; he never said another word.

But that was just fine, because the bus driver was a real local character, pointing out the waterfalls, peaks, route names, and not least Nokogiri, which from here was a terrifyingly serrated ridge that renewed my awe for cjw’s report of two months ago.

The elderly driver stopped the bus and pointed to the ridge. “See that hole in the rock?” It was true, even from a distance of 3 kilometers on the opposite side of the valley, we could clearly see a needle’s eye formation just below the ridge. “Well, that’s Shika no mado (鹿の窓,  The Deer’s Window). And as I’m the bus driver, I’m allowed to boast a little.” And as he spoke, he pulled out a large black and white photo of himself in his youth, standing proudly in that window alongside a lady, whom I imagined now to be his wife.

“And over there, see that massive rock face?” We all peered across the valley. It was preferable to looking down the vertiginous cliff to the river some 2000 feet below. “If you look closely, you can see a path across the face. That’s a deer track. They come to lick the salt. This whole area used to be under the sea.” If he was fibbing, he was good at it.