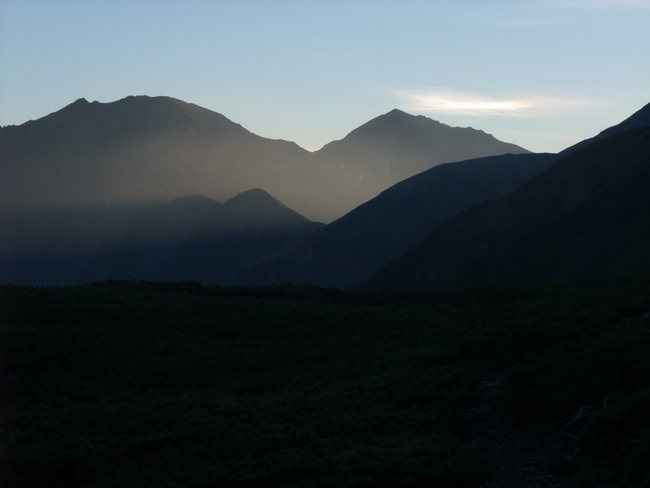 Refreshed after sleeping and refueling, we made good time up over Akaishi and on across the dramatic, rugged ridgeline, now moving toward the midsection of the route. This was where other approaches join from the east for hikers wishing to make just a one-night trip to Akaishidake and Warusawa. The relatively convenient access, though still 6 or 7 hours from Tokyo just to the trailhead, had brought a couple of hundred, mostly elderly hikers to admire the wildflowers on Warusawa. But no sooner than I had gone 5 minutes beyond the Warusawa junction on the ridge and I was on my own again, and I saw no one else for the next 5 hours.

As I emerged into the clearing of the Takayama emergency hut, I noticed the owner standing in the doorway, arms folded, staring at me. I slipped the lead onto Hana, anticipating a tongue-lashing. “So you’re the person who set off from Tekari yesterday? I’ve never heard of that before, and I’ve been here since this hut was built 30 years ago.” He had been informed by hut radio, presumably from Tekari or Hijiridaira.

But he was wrong. The TransAlps trail-running race passes this way once every two years, averaging  60 km a day in a 7-day, 420km coast-to-coast unsupported run across the Northern, Central and Southern Alps. The runners, and the number is limited to just 10, are not even allowed to stay in the huts or buy food there. Entry costs just 1,000 yen, but there is no support whatsoever, indeed, support of any kind is prohibited. In 2006, just two finished. The winner and Japan’s leading trail runner, Takahashi, died of a heart attack the following year in the 132 km TokyoTrailRun. The other was Mase Chigaya, in her 40s, housewife, and mother of two.

As the old man poured me a cup of oolong tea, he explained that Tokai Pulp owns most of the Southern Alps, including this hut. The hut is only open for a couple of months, and he used to carry in all his food, but he admitted, “Now the company drops me and the supplies in by helicopter, just an hour from Matsumoto. Once you’ve experienced that luxury, you’ll never hike it again.” Even at age 70, he still carries a chainsaw and tools to fell trees and clear the trail. I offered him some muesli, but in reply he merely opened his mouth to reveal no teeth. We sat on the bench and chatted in the sunlight filtering through the trees. He seemed perfectly content.

Encouraged by his warmth, I pushed on for another 3 hours to Sanpuku. Along one of the most beautiful routes, dipping through forest paths before breaking out onto exposed ridges, with landslides carving the mountainsides, I came across only one other hiker. He was sitting peacefully on the edge of a collapsing ridge, a drop of a thousand foot at his feet, staring into the distance and waiting for the mist to clear. A serious Himalayan mountaineer in his youth, he was now in his sixties and enjoying the easy hikes of Japan. His mission was rockie-han. “You don’t know that word?” he asked. “Location hunting.” He carried a large SLR and phalanx of lenses, but this was merely a prelude. When the production chief back in the studio had seen the photos that he would take and made his choice, this elderly man would return with a massive plate camera weighing 10kg. 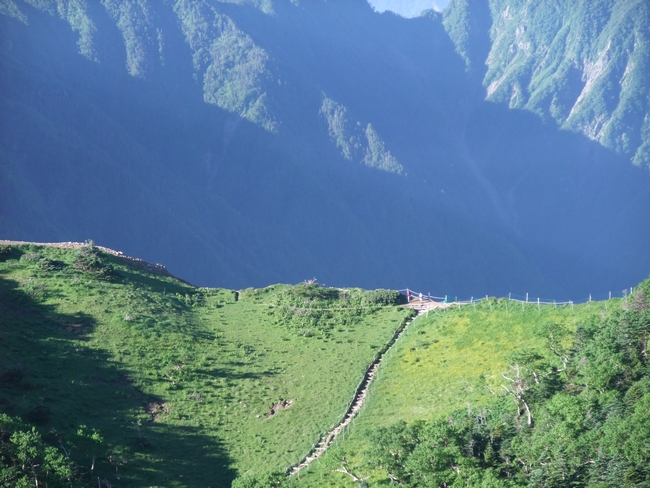