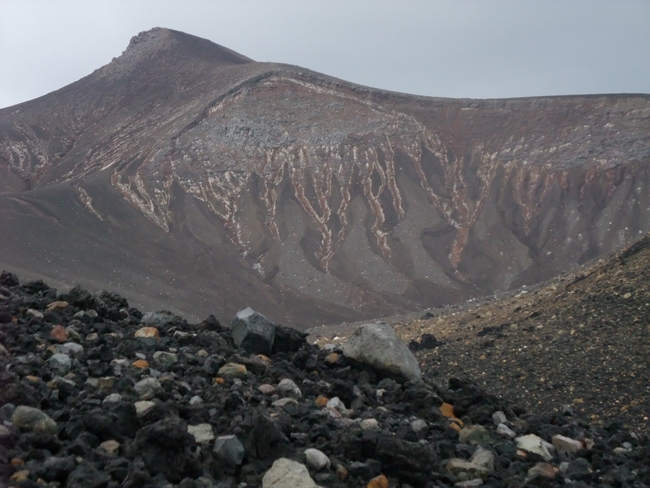 The dawn had brought calmness to the land. There was nothing to hold us back as we stared up the cinder flank of Tokachi, white gas spewing forth from a crater. But the forecast was grim once again, and even at 4 am, the clouds were rolling in and the sky darkened as we ascended, putting speed into our legs. Up over the first crater rim, and beyond us stretched a narrow ridge separating two other craters, leading the way across a black lava field up to the summit. This was paradise – an almost flat cinder track! But the rain began to gather strength, so we did not loiter. No summit picnic, no snacks for Hana. We were back at the car just 2 hours 20 after leaving it. 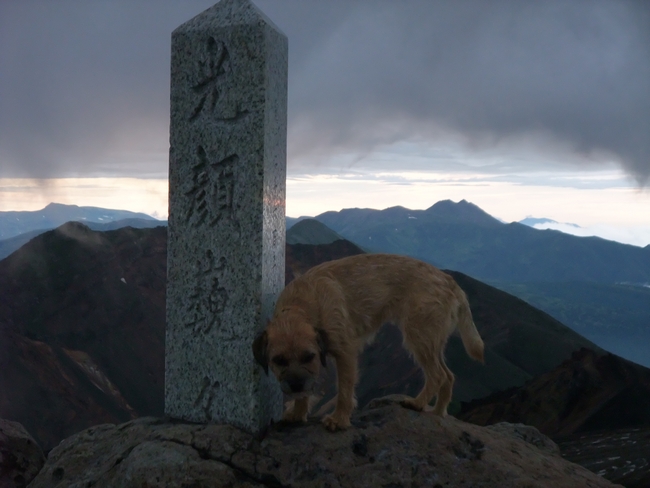 While the ever-selfless Kin drove, I slept most of the long route to the southern trailhead of Tomuraushi. What a name! It sounds nothing like Japanese, and conjures up images of mystical spirits inhabiting untamed mountains. Today, Tomuraushi felt untamed. There were few people on it, and I saw several shima-risu and a wild fox. But the foxes are dangerous, carrying the fatal Echinococcus parasite. It was prowling near a magnificent lookout toward the peak, unafraid of humans, suggesting that it had been fed by hikers. I picked up Hana and carried her for a few hundred meters until out of danger. 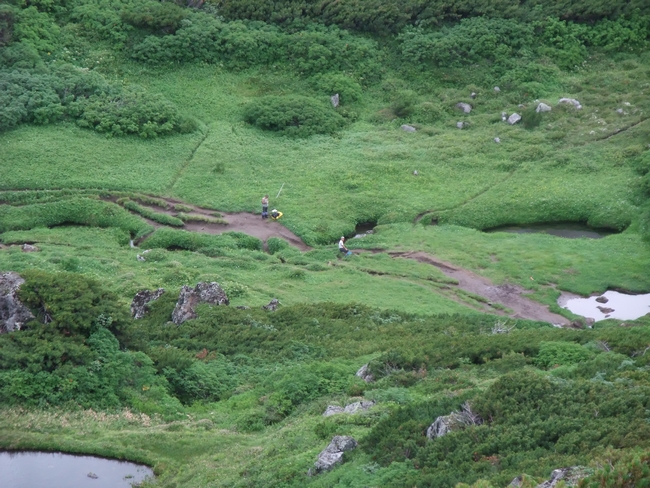 By the time we descended, the rain was coming down hard and the path was a mud-bath. I have never hiked in such disgusting conditions. The mud was unavoidable and up to a foot deep, slopping above the gaiters and running down the calves into the boots. Of the 10 kilometre descent, 5 were mud. The dog was not happy.

I returned to the car, where Kin had patiently waited (and studied) for almost 5 hours, unable even to go for a walk. We quickly abandoned thoughts of a 5-hour drive to Poroshiri, and sought refuge in Tomuraushi kokumin-shukusha onsen. We presented our grubby selves at the reception, on a Sunday evening, in peak holiday season, at 10 minutes to 6 pm. Not only did they have a spare room, but they welcomed us warmly, could feed us a full evening meal at 6, and had a huge onsen. I cannot imagine such exquisite service and meal happening in England.

One thought on “Tokachi + Tomuraushi”