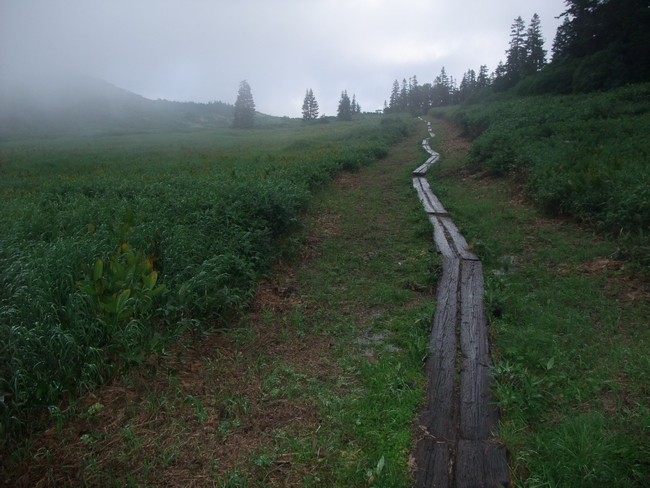 After driving over from Amakazariyama last night, I had had just 3 hours of attempted sleep while the rain threatened to drill holes in the roof of the car. In the half light, the air hung heavy with exhaustion after the frenzied rain fight of the night. Although there were many cars around for this popular mountain, there was no sign of stirring yet, so I got onto the track quickly and started up this double hill.

Myoko and Hiuchi come as a pair, forming a triangular route instead of the usual piston, with two huts perfectly spaced whichever direction you choose to do the loop. Most people spend at least one night, but the total maptime is less than 15 hours. I chose to knock off Myoko first as the descent from Hiuchi when tired would be easier.

Hana sensed something was up long before I could smell it. Ears pricked up, head forward, a sudden tautness of the body, and visible agitation. I scanned the surrounding forest on both sides, but the sasa grass was tall and impenetrably thick. Crash! Something was moving fast just ten metres ahead, blurred movement, blackness, and then a large bear lumbered out onto the trail in front and smashed back into the undergrowth. What a privilege to see such wildlife in Japan! For a while thereafter, I kept calling out to alert it to my presence, but it seemed just as keen to avoid further confrontation.