I had printed off Wes’ detailed description of this attractive Hayatsuki route for Tsurugi, which encouraged me to set off at 2 am despite the alarming weather forecast for torrential rain, landslides, and lightning during the night, plus Wes’ warning “Do not attempt this hike in rainy weather”.

But the climb was a reward for most of last year spent on the stairmaster. Some 2200 meters of ascent, much of it on a nice steep set of sandbags and tree roots. The comforting light of the hut came into view far up ahead, then receded into the distance below as the climb broke out of the forest and changed to a rock scramble. As dawn came and the sky started to lighten, the clouds above looked menacingly oppressive. And as the chains appeared, so too did the rain, and the rock turned black and slippery. 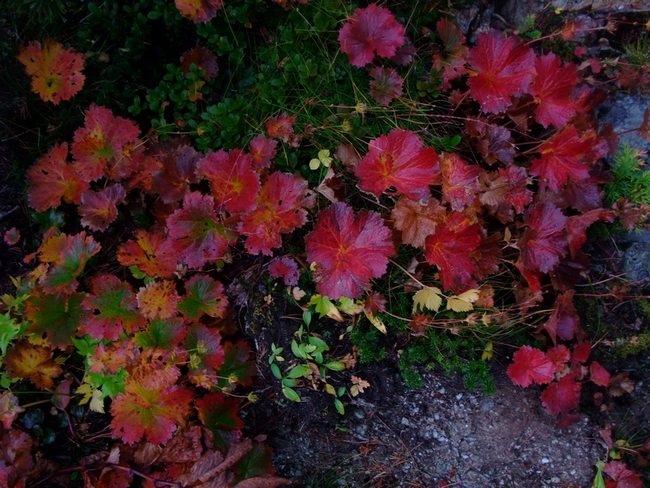 But I really didn’t mind. I’d far rather deal with this than officials on Tateyama transport. Although looking a little scared, the dog gamely managed to scramble up all of the rocky sections except for a couple. Holding the dog under one arm and the chains in the other, I could take my time to be safe. The crowded route on the other side of Tsurugi would not have been pleasant.

In the forest on the way up, the pool of light of my torch had landed on a bee, a large yellow suzumebachi. It had caught my attention, for it was strange to see a bee moving at night. On the descent, the bastard stung me. It’s been a while since I’ve felt such pain, and I did not need any caffeinated chewing gum to keep me awake on the 5-hour drive back home.